The band together one day back in 2013 in the deepest darkest part of Darlington, the market town based in the Tees Valley in the north east of England.

A few members came and went during rehearsal until they were at a stage to seriously think about gigging.

Some highlights so far -

They have supported acts like Bad Manners, The Lambrettas, The Beat, (Both Roger & Daves) The Hotknives, Bombskare, The Toasters, Vin Gordon, Dennis Alcapone, Roddy Radiation of The Specials, Bruce Foxton's From The Jam at venues like ARC Stockton On Tees where they had a successful performance and successful performances at the 02 Academy Newcastle. They have also played with members of The Specials, Bad Manners & The Selecter. They also have played at festivals such as Stone Valley, YSA Invasion 12, the Great Northern Mod & Ska Festival, The Lindisfarne Festival, the Woodhorn Festival and the prestigious gig at the Feuerwerks Open Air Festival at The Reduit in Mainz, Germany amongst many other successful gigs. They have recorded tracks in the past for the Specialized Project that raises money for Teenage cancer Trust & Youth Music UK- " Police On My Back" for the Specialized project album " Combat cancer- A tribute to The Clash", "Midnight Ravers" for the 2016 "One Heart - A tribute to Bob Marley" album and "Smithers Jones" for the 2017 Specialized tribute to The Jam. Also, they have also headlined events for March Of The Mods, Our House all dayers in York and Barnard Castle Big Day Out, The Leadgate Big Bash and sold out twice and had turned people away at their hometown gig at The Forum Music Centre in Darlington. They've also released 2 CD Eps "The Tommy Gun EP" and latest " Rudys Return " EP which features Lynval Golding & Jon Read of The Specials. They have also played many festivals with and January 2020 saw them just edged out in the semi final heats to play the prestigious Glastonbury Festival- into the last few from 1000s.

They 've played at prestigious venues like The Dublin Castle, Hope & Anchor in London and played the 100 Club supporting Lee Thompson of Madness in 2017 with the band The Silencerz. They returned to The Dublin Castle where Lynval Golding of The Specials joined them onstage and Lee Thompson of Madness danced in the crowd. In January 2018 saw the  release the title track of their forthcoming album "From Cradle To Grave" which hit number one in the UK Reggae Charts and this was followed up in May 2018 by their second single "The Ghost In Me" which hit the Top 10 in the UK Reggae Charts - a fantastic start for the original stuff and this was followed by a Top 5 placing in the reggae charts for the follow up "Betrayal Of Trust" .The debut album "Cradle To Grave" was released in September 2018 and sold out the Cd runs three times over and was followed by the 12" vinyl gatefold album which has continued to sell well, picking up rave reviews in magazines such as Vive Le Rock and other online blogs and sites. In December 2018 a remix of their track "Skapones A Go Go" hit the No,1 spot in the UK Reggae Charts, knocking The Specials from the top spot. Our last single "When Its Gone Its Gone" also hit the Top 3. We have undergone a massive UK, Ireland,Europe tour in 2019 and spent 2 weeks touring the USA in August 2019 which resulted in them being invited back in 2020 BUT THE HIGHLIGHT WAS BEING MADE SUPPORT FOR THE SPECIALS ON THEIR 40TH ANNIVERSARY TOUR IN MAY 2019 - WHAT AN OCCASION

8 singles in on their discography  and In 2020, the band released their first ever USA release in a split 7" vinyl shared with the Detroit Riddim Crew which saw the track "The Girl Inside" which simultaneously was pickled up by Spinning Riot Records in Mexico for Mexican distribution. A cassette version of "Cradle To Grave" also was released in 2020 as was their documentary "Way Out West" , the story of their 2 week tour of the USA.

Work has started in earnest on their 2nd album "Northern Gods".

See, its all go and that's how they like it. Come on board the good ship Skapones -  she's sailing away on good tides, come and join the cruise... 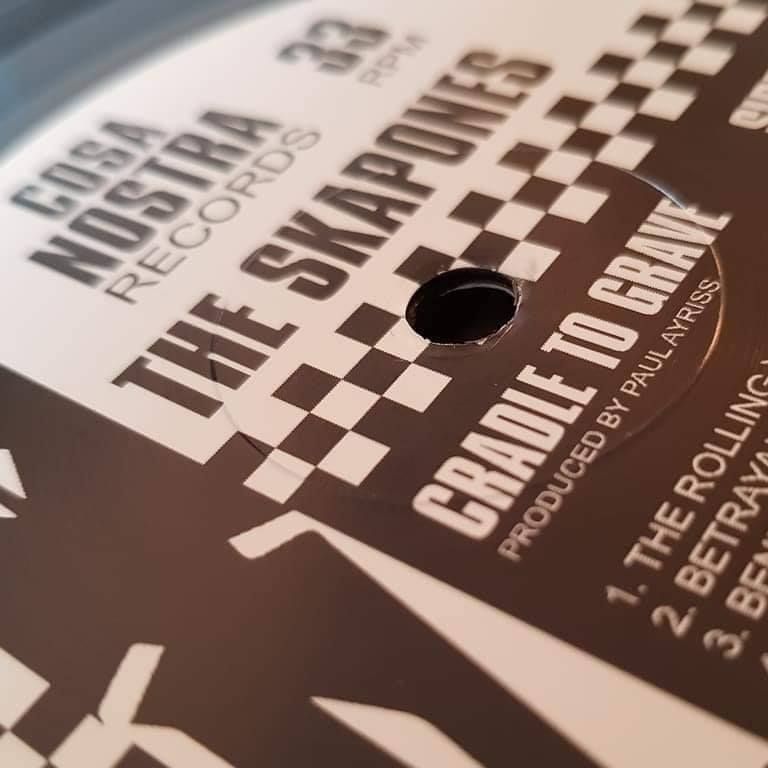